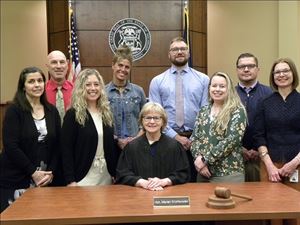 MICHIGAN COURTS: Leelanau County is one of 83 counties in this great State of Michigan. In 1818, a Court of Probate was established in each county, the members of which were appointed by the Governor and from which appeals might be taken to the Supreme Court. These Courts continued in operation until Michigan was admitted into the Union as the 26th state on January 26, 1837. The Constitution of 1963 provided for each county to have a Probate Court and that "...they shall have original jurisdiction in all cases of juvenile delinquents independence, except as otherwise provided by law...".

FAMILY DIVISION: As of January 1, 1998, the Legislature created the Family Division of the Circuit Court and moved what traditionally had been Probate Court matters of adoption, child protective proceedings (abuse and neglect), emancipation of minors, juvenile delinquency, name changes, and other ancillary family matters from the Probate Court to the Circuit Court - Family Division including Domestic Relations matters.

Honorable Marian Kromkowski: Judge Kromkowski was elected as Probate Court Judge in 2018 and took office on January 1, 2019.  In Leelanau County she also presides over the Circuit Court-Family Division.

Judge Kromkowski came to the bench with 39 years of experience as a lawyer. She graduated from Wayne State University Law School in 1979 and from Indiana University in 1975.  Prior to her election she was in private practice with her husband Matthew Posner in the firm of Kromkowski & Posner, PC.  She specialized in criminal trial and appellate work, family law and domestic relations mediation.  Judge Kromkowski was the first Domestic Relations Referee in the 13th Circuit and served from 1993 through 1997.  In 1998 until 2018 she was a part-time referee in the 28th Circuit Court.  Judge Kromkowski was also the first attorney in the 13th Circuit to be trained as Domestic Relations Mediator. She was also a Collaborative Divorce practitioner.

Judge Kromkowski and her husband Matthew Posner have three daughters.  Matthew’s family has enjoyed ties to beautiful Leelanau County since 1947. The couple moved to Leelanau in 1987 and made Suttons Bay their home.

Cameron Clark is the Family Court Administrator and Volunteer Coordinator.   Cameron comes to this position with 17 years experience in this work in both Manistee and Benzie Counties, both as a Probation Officer and Juvenile Court Administrator.  He has lived almost  his entire life in Benzie County with his wife Anne, where they raised their two children.  He attained a Bachelor's Degree in Psychology from the University of Michigan in 1985.  Cameron has  been a school leader for at-risk youth, grades 7-12, as well as running residential facilities for at-risk youth in New England.

Therese Hahnenberg-Larson is a Juvenile Probation Officer working mainly with females. She was hired by the County in 1995. Previous to being hired full time, Therese volunteered her time with the Court as an Intensive Probation Monitor. Therese also served as the Council Director for Northern Lower Michigan’s Girls on the Run for 17 years, retiring in 2018. Therese was born and raised in Leelanau County. She received her Bachelor’s Degree from Siena Heights University. Therese has two beautiful daughters and is married to Erik Larson.

Ryan Douglass is the Substance Abuse Caseworker/Juvenile Probation Officer for the Family Court. He was hired for this position in 1999, and works primarily with males. Ryan resides in Grand Traverse County and has been a resident there since 1980. He received his Master’s Degree from Western Michigan University and is a Licensed Professional Counselor. Prior to working for the Court, Ryan worked as a counselor at Starr Commonwealth, Child & Family Services, and Northern Family Intervention Services.

John Boonstra is the Diversion/Prevention Counselor for the Probate and Family Court. He has worked for the Court since 2013.  A lifelong resident of the Northern Michigan area, he currently residing in Traverse City with his wife and three daughters. John is a licensed professional counselor, a nationally certified counselor, and a certified prevention specialist.   Prior to working for the Court, John has worked with runaway and homeless youth programs through Third Level, on the suicide prevention lifeline, as a member of children's crisis team, and as a youth camp director.  He also currently works with Northern Lake Community Mental Health emergency services.

Josephine Lingaur is currently the Juvenile Register for the Family Court. She was initially hired by the Court in 1999 as Deputy Probate Register. Upon restructuring of the office, Josephine was promoted to Juvenile Register in 2011. She is also a Certified Court Recorder and Notary Public. Josephine and her husband, Dale, have four adult children and are grandparents to five children.

Sarah Hubbell is a Diversion/ Prevention Youth Counselor for the Probate and Family Court.  She was hired in 2019, and works primarily with females.  She currently resides in Traverse City, with her husband, two children, and their silver Labrador.  Sarah received her undergraduate degree in Elementary Education from Northern Michigan University in 2003.  She then received her master's degree in Counselor Education from Western Michigan University in 2007.  Sarah is a limited licensed professional counselor, who has worked with youth in this capacity for over ten years.  Prior to working with the court, Sarah received the necessary training and education through work with numerous agencies in Traverse City.  She also worked as a home-based therapist with community mental health for many years.  Sarah enjoys being active with her family as well as with clients.  She enjoys the outdoors by hiking, biking, kayaking, skiing, and snowboarding.

County How Do I